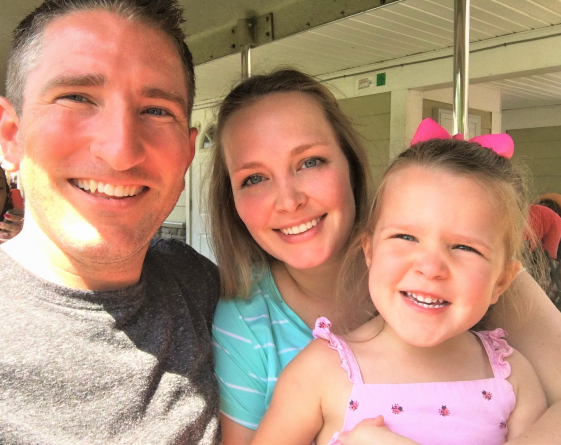 Since my second trimester, when I was pregnant with my daughter, I have been serious about sleep. I remember giving my husband the ultimatum – “It’s either you or the dog – the four of us cannot fit in this bed!” (Yes, I counted my baby belly.) Admittedly, this was a bit melodramatic, and also a little unfair to our devoted dachshund, Lexi, who undeniably was around before my husband. But sleep was so important – and so hard to come by!

With this realization, I wondered if I was going to be in big trouble once the baby got here, but I figured I had it covered… just “sleep when the baby sleeps”, right?

When my daughter Avery was born, we were overjoyed and captivated by this tiny, new person. She was such a little marvel. However, all of the folklore and advice from family and friends combined hadn’t truly prepared us for the sleeplessness that accompanies life with a newborn. My husband was back at work just a couple days after bringing Avery home from the hospital, and I was on my own. I tried to sleep when the baby was sleeping but only found myself getting irritated at such unrealistic advice. I was exhausted, and the lack of sleep was making me cranky and tired – not the mom I had envisioned myself being, or the mom I felt my daughter deserved.

I decided to start sleep training, feverishly tracking her sleep patterns, trying to influence her schedule to get longer stretches of sleep. Much to the disbelief of our family and friends, I found I was able to “crack the code”. Avery became a sleep champ and I prided myself on our huge accomplishment. She was thriving and getting the rest she needed, and I was energized, present and able to be the mom we both wanted.

Fast-forward a few years: my son AJ was born. Again, I went to work, encouraging good sleep habits and collecting his sleep “data” like a scientist on a mission. He was also sleeping through the night early on and had a great routine, UNTIL the notorious four-month sleep regression. Then, in the midst of the regression, he not only started teething but ran into daylight savings, which just added insult to injury. Did I mention he also started trying to roll over but would only sleep swaddled up?

It was a nightmare. In a matter of two weeks, all of the success we were having had completely unraveled. So, each day I researched sleep tips, tweaked the schedule, tried implementing different recommendations, only to seemingly make things worse. We were spiraling.

At our worst, we were dealing with seven-plus pacifier runs each night, early morning wakings each day, unstructured feeding schedules (and zero sleep for me). Then, one morning just before 5am, I was deliriously rushing to my son for another pacifier run when I heard my 3-year old daughter shushing him from her bedroom. My heart broke. She was getting woken up by him too! The whole house was held hostage – none of us getting the sleep we needed and all growing salty at our new situation. Things had to change.

After minimal deliberation I hired a sleep consultant. We went back to basics: naps, schedule, routines… And even after the first day I noticed great improvement. AJ seemed happier with his new schedule; like the routine was more in sync with what he needed; and he wasn’t getting overtired or fussy. After a few days, pacifier runs were a thing of the past, and within a week the early morning wakings were noticeably moving later and later, until eventually he was sleeping 11.5-12 hours per night, consistently!

What a world of difference! When you’re in the midst of it, you forget what it is like to feel refreshed and in the moment. AJ is happy and thriving, not only because he’s getting enough sleep to grow and develop, but because he can rely on our routine to give him what he needs throughout the day. What’s more, once the kids are in bed, I even have time to myself to read a book or watch a movie with my husband.

Now, the whole house is getting the sleep we need. 😊

Why did you decide to become a sleep consultant?

At the height of our sleeplessness, I was studying, scrutinizing and testing just about every recommendation or notion I came across, leaving me exasperated and confused. All the information that’s out there is overwhelming and often contradictory. I saw firsthand how getting a customized sleep plan, specific to your situation, helps to streamline the process and propel you forward. You get to ask specific questions and get specific answers. And looking back on my journey, I realized I was doing things the hard way until I worked with someone one-on-one.

I have talked to so many who think that a “good sleeper” is just luck, something unattainable for them, but I know that with some patience and persistence, consistent sleep is attainable. And having been on both sides of the spectrum, I know that getting restful sleep is important for child development and life-changing for the parents.

No one is their best self when depleted and worn down. My hope is to help other families get the sleep they deserve. Can I help you, too?